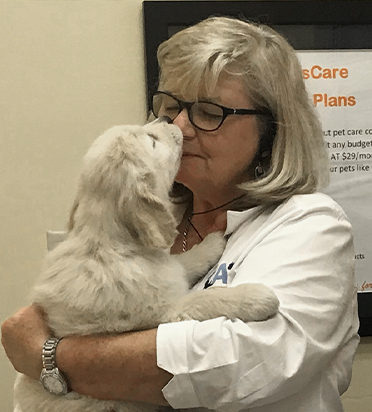 Practice Manager
Gail came to Conyers Animal Hospital as the Practice Manager in 2015. She came to us with 26 years of experience in customer service and an enthusiasm that could run the World! Gail is an iconic face in the community of Rockdale County. She is a Rockdale County Chamber of Commerce Ambassador and a member of the RCCC Morning Motivators Leader Group. She has a passion in development of the upcoming generations. Gail is on the Board of Directors at the Rockdale Career Academy as well as on the advisory team for their “Veterinary Science Program” and Work-Base Learn Program. She was the former VP for the Georgia Veterinary Managers Association. Gail participated in the Rockdale Leadership in 2016 and the Butts Leadership Class in 1998. Gail continues to be a leader in her community, previously the President of Butts County Humane Society and the Greater Butts County Lions Club. Gail’s many awards include, Butts Co. Chamber of Commerce Employee of the Year in 1998 as well as in 2008. She received the Award for Outstanding Leadership from the Greater Butts Co. Lions club. Gail has also received the 2019 “Supervisor of The Year” for the Rockdale Career Academy Work-Base Learning Program.

In her free time she enjoys golf and working in the yard. She has a sweet goofy dog named Marty and 5 cats; Hip-Hop, Peaches, Trey, Gus, and Jean.