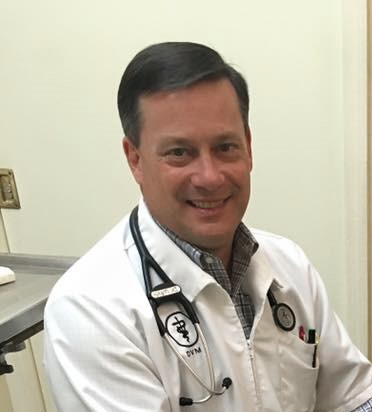 Dr. White was raised in Kingsport, Tennessee and has been practicing veterinary medicine for nearly 30 years. He earned his Bachelor of Science degree in biology from Wake Forest University in 1986. In 1990 he graduated from the University of Tennessee with his Doctorate in Veterinary Medicine. He moved to Conyers and became an associate at Conyers Animal Hospital in 1991. In 1996 he became a partner and then sole owner in 2010. In 2016 Dr. White acquired Social Circle Veterinary Hospital.

Dr. White is a member of the Georgia Veterinary Medical Association and the American Veterinary Medical Association. He is a resident of Conyers and has been involved in a variety of organizations to help he community including the United Way of Metropolitan Atlanta, Conyers Rotary Club, Prevent Child Abuse Rockdale, Walk of Hero’s Veterans Memorial Park, Leadership Rockdale, Conyers/ Rockdale Chamber of Commerce, Hands Across Rockdale and the Rockdale Hospital Foundation. He was named a 5-Star Veterinarian by clients and peers in Atlanta Magazine, November 2010 and Voted “Best Veterinarian” in Rockdale and Newton County 2018 and 2019.

Dr. White is married to Kay Cook the owner of Body Tech Fitness center. He has two wonderful children Erin and Colin, along with his step children Timothy and Lauren. His interests include hiking, hunting, fishing, woodworking, restoration.